Your Eminence Archbishop Elpidophoros of America,
Your Eminence Metropolitan Emmanuel of Chalcedon,
Your Eminences and Graces,
Conference Co-Chairs Konstantine Ouranitsas and Harry Koulos,
Brothers and Sisters in Christ,

This is a real pleasure for me today, to give this brief presentation today to the YAL Conference on the Saint Nicholas Greek Orthodox Church and National Shrine. His Eminence Archbishop Elpidophoros already gave you a look at the Consecration happening this weekend. I am going to give some background for our discussion.

First of all, I would like to express my profound to our Archbishop for appointing me to be the first Proïstamenos of the Saint Nicholas National Shrine. It is as humbling as it is sobering, to be entrusted with this national treasure of our Archdiocese.

Together with the newly appointed Parish Council of Saint Nicholas, led by its very energetic and competent President, George Mihaltses, and the amazing group of visionaries and benefactors that we know as “The Friends of Saint Nicholas,” we are very just around the corner from completing the adornment of the Shrine, and then set off to tackle the mission that His Eminence has put before us. And that is this: to bring forth at Ground Zero a nationwide ministry for the Shrine that will do the following:

1: Meet the needs of the surviving families of all those traumatized by the events of 9/11;

2: Be a presence of faith and reconciliation at Ground Zero for all people; and

3: bear witness to our Orthodox Faith and the story of the Greek Orthodox People of America in a way that brings our Church into the public consciousness as never before. 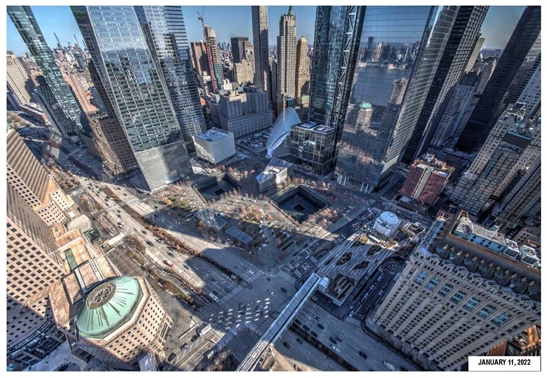 I’ve just put on the screen a recent picture of how our Saint Nicholas Shrine fits into the rebuilt World Trade Center Site. Atop Liberty Park, and overlooking the Memorial Pools that are the exact footprints of the Twin Towers, our Shrine may seem small in respect to its surroundings, but we occupy perhaps the most important parcel of the sixteen acre site.

For in a sea of glass and steel, we are an island of sanctuary, a rock of faith, made from the same stone as the Parthenon of Athens. Literally so! The same Pentelic Marble that was hewn and carried all those miles from Mount Pendelikon, and then hoisted high atop the Acropolis – twenty-five hundred years ago! – this is the same marble that has been granted to us by the Government of Greece to remake our Saint Nicholas Church.

Many people do not know that the Parthenon of Athens, perhaps the most recognizable building in the world, was built following a catastrophic attack on Athens during the Persian Wars.

In fact, the Parthenon was a re-building of a prior temple that was destroyed in the fires that consumed nearly all of ancient Athens. Recent discoveries found relics of the first Temple carefully and, I would say, lovingly, buried in the new foundation.

This says a lot about our new Saint Nicholas National Shrine. The little Church on Cedar Street was destroyed in the hate-filled attack of 9/11. We have rebuilt it not only as an act of remembrance, but as an act of love. And we will enshrine the few precious objects that survived the catastrophe of 9/11. 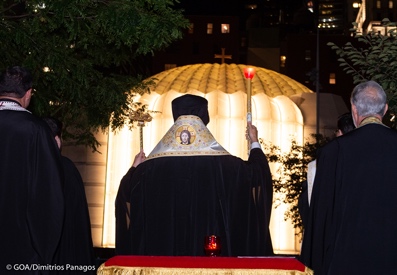 A year ago, on the eve of September Eleventh – the Twentieth Anniversary of that fateful day, our Archbishop presided at the lighting of the Church for the first time. This deeply emotional moment signaled the commitment of the Greek Orthodox Archdiocese to keep its promise to the American People, a promise made firm by our Archbishop. He reiterated the praises for the fallen of Pericles of Athens from his famous Funeral Oration, and most importantly, the words of our Lord Jesus Christ:

Greater love has no one than this, to sacrifice your life for your friends. (John 15:13) 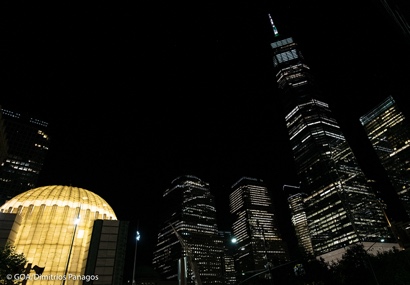 In that moment, everyone beheld what the Shine was meant to be – a shining city on the Hill, a lamp glowing with the Light of Christ on the lampstand of our Orthodox Faith. 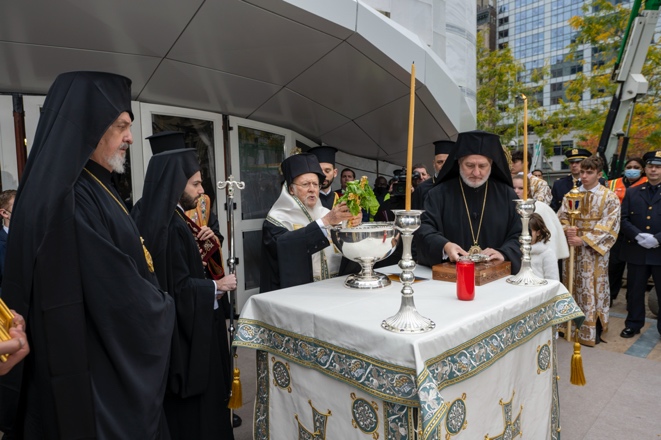 When His All-Holiness Ecumenical Patriarch Bartholomew visited the Shrine last November 2nd – the very day of the Thirtieth Anniversary of his Enthronement on the See of Saint Andrew, he brought the relics of Saint Nicholas and blessed the Church by opening its doors, he raised the Cross of our Lord Jesus Christ atop the Church, and now the message is clear. 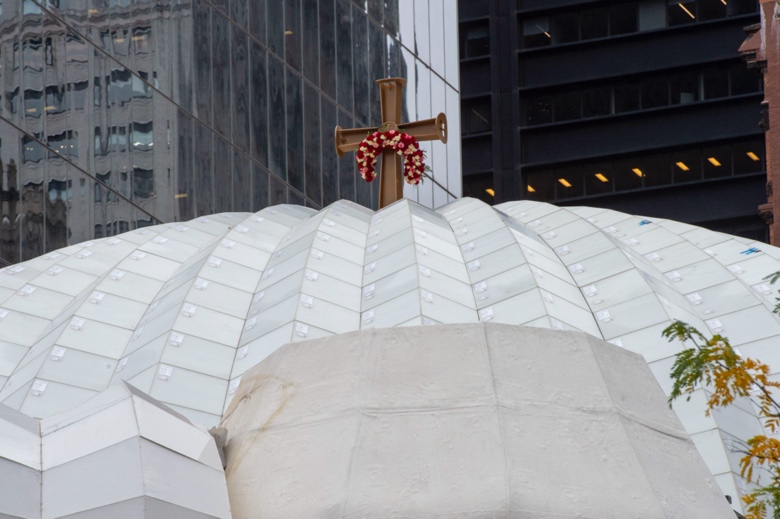 The Saint Nicholas Greek Orthodox Church and National Shrine will be a perpetual memorial and witness to our Faith, to religious liberty, and to the values of this country that were attacked on 9/11.

Within the Sanctuary, even the iconography will reflect the events the day of 9/11 and the truths that we speak as Orthodox Christians about God’s providential love of the world. Just look at this magnificent Πλατυτέρα that is adorning the apse of the Church. This icon will become a “must-see” for all those who visit Ground Zero, and want to understand the role of our National Shrine.

The renown Iconographer, Father Loukas from the Monastery of Xenophontos on Mount Athos, has already commenced the installation of the iconographic program – complete with a life cycle of Saint Nicholas. The pictorial Life Cycle in the Shrine of Saint Nicholas will include six scenes, adapted from various well-known examples from the Byzantine/Orthodox visual tradition:

Allow me to show you a picture of the traditional “Sea Miracle” icon of Saint Nicholas, which will incorporate into in the story of 9/11.

This icon is unique in the Shrine, because it shows the traditional depiction in its upper register, but the Day of 9/11 in the lower. We see the Twin Towers after the attack, the original Church at 155 Cedar Street, and the flotilla on the Hudson River that evacuated hundreds of thousands. The churning seas dissolve into the billowing smoke at Ground Zero, as we see the Saint rescuing a man from the sea, or is it a soul from the ashes of 9/11? This powerful icon will no doubt also become a destination for those who visit the rebuilt World Trade Center.

After the installation of all of the Iconography, which requires scaffolding to cover nearly all the interior of the Sanctuary, we will open the Shrine to its full liturgical life, sometime in the Fall. 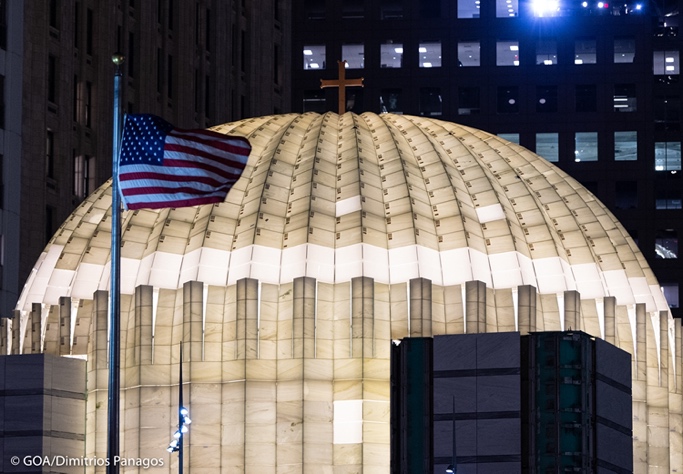 In closing, allow me to thank you once again – and say how much I look forward to welcoming you there in the coming months, and to years of service to Christ and His Holy Church in the ministry of our National Shrine.