The Orthros service and Hierarchical Concelebration of the Divine Liturgy were held in the Grand Ole Opry House, which had been prepared with an iconostasis and Archieratical throne for the Liturgy. 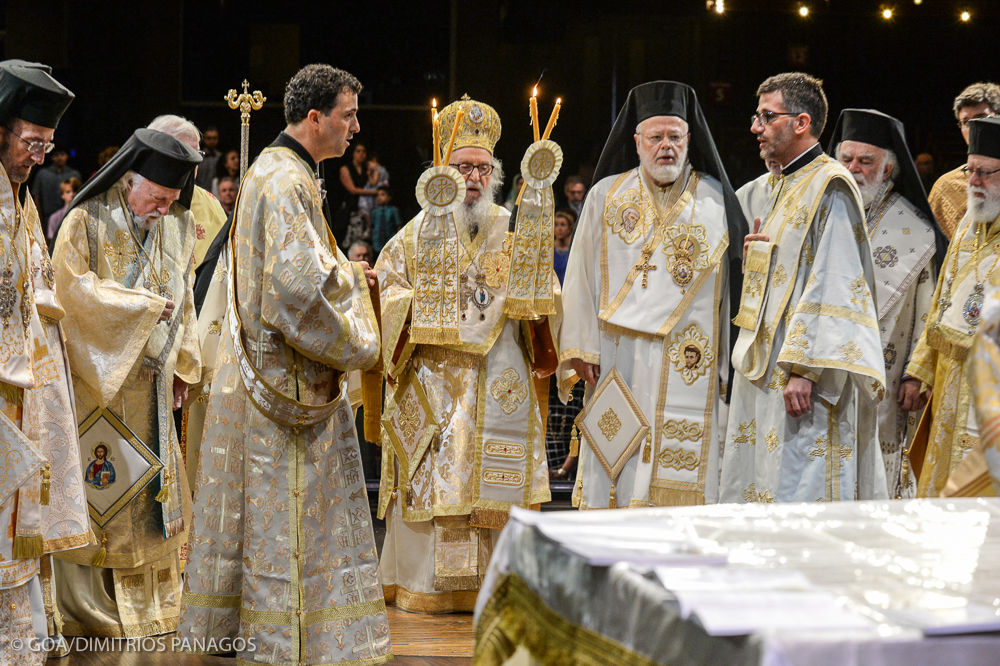 His Grace Bishop Sevastianos of Zela, the Chief Secretary of the Holy Eparchial Synod and His Grace Bishop Apostolos of Medeia were in prayerful attendance in the altar. Assisting the Hierarchs were the Reverend Fathers Joel McEachen, President of the Retired Clergy Association; Christopher Metropulos, President of HCHC;  Lou Noplos, Vice President of the Archdiocesan Presbyters Council; and Gregory Hohnholt, Proistamenos of Holy Trinity in Nashville. Also serving were Archdeacon Panteleimon Papadopoulos and Deacon Paul Zaharis, Archdeacon Ryan Gzikowski and Deacon Alexander Radulescu.

Just before the dismissal of the Liturgy, Archbishop Demetrios of America spoke to the hundreds of faithful in attendance. He thanked his brother Hierarchs of the Holy Eparchial Synod, the Metropolitans representing His All Holiness Ecumenical Patriarch Bartholomew and the host, Metropolitan Nicholas with his organizing committee co-chaired by Mr. and Mrs. George and Lee Ann Anderson.

The Archbishop, in his homily, said that the theme of the Congress “You are the voice of Christ in a changing world” coincides perfectly with the Gospel reading of today’s Liturgy (Matthew 4:18-23) in which the Lord called his first four disciples to become “fishers of men” and apostles. Likewise, said His Eminence, we have been called to be apostles, to be on a mission for Christ and be the voice of Christ in our lives and in the world that is not simply changing but is a wounded, confused and tormented world. In closing, the Archbishop expressed the wish for “this 43rd Clergy-Laity Congress in Nashville to be an occasion to enjoy the abundant unlimited blessings of the love and grace of God.”

The two representatives of the Ecumenical Patriarchate Metropolitans Ambrosios of Korea and Damaskinos of Kydonia and Apokoronou, each offered greetings and congratulations, and conveyed the patriarchal blessings of His All-Holiness.

Later in the afternoon Archbishop Demetrios was joined by the Patriarchal representatives, the Metropolitans of the Holy Eparchial Synod and members of Leadership 100 including its chairman George Tsandikos and Executive Director Paullete Poulos for the cutting of the ribbon at the official opening of the Congress Exhibit Hall. Leadership 100 is the underwriter for the exhibit area, which features numerous booths with vendors from the United States, Canada, Greece, and Cyprus and includes a ministry pavilion that highlights the national ministries of the Archdiocese.

The Order of St. Andrew the Apostle - Archons of the Ecumenical Patriarchate and the National Forum of Greek Orthodox Church Musicians hosted in the evening two separate very well attended receptions for their membership and the Congress delegates.