Address by Michael Psaros at the Consecration of St. Nicholas Greek Orthodox Church and National Shrine 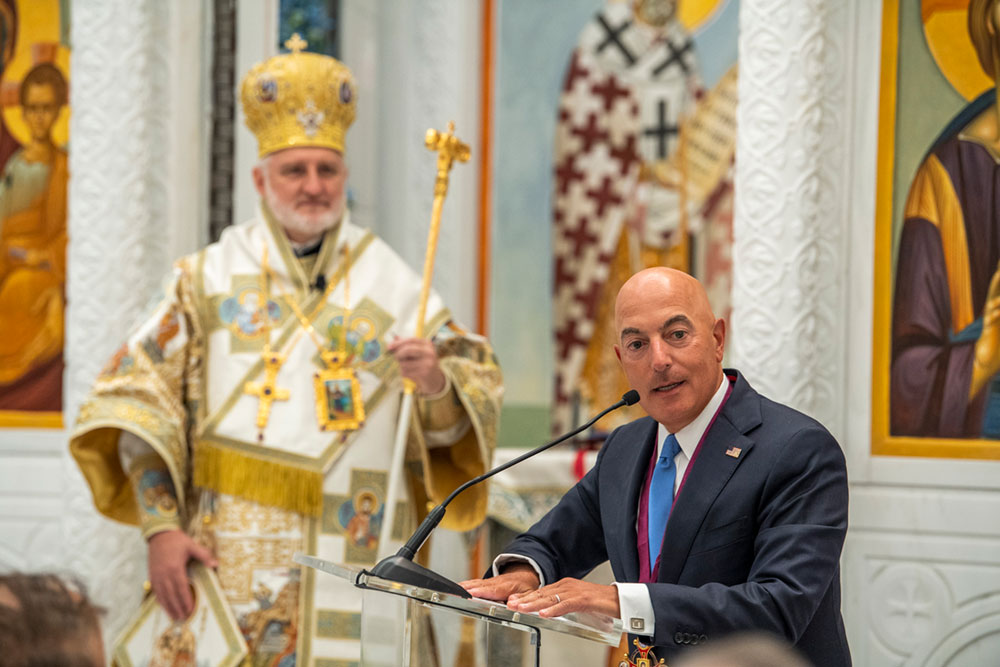 Good morning and thank you for your important presence on this historic day.

I am Michael Psaros, Vice Chairman of the Friends of St. Nicholas.

Over 20 years ago, the only House of Worship at Ground Zero was destroyed on September 11th .That Church was the first place our immigrant forebears encountered after they passed through Ellis Island to the dream of America.

Today, we consecrate a magnificent new House of Worship at Ground Zero, a breathtaking architectural masterpiece designed by Santiago Calatrava, the world’s most famous architect.

New York now has a National Shrine, a monument truly worthy of the greatest city in the world. May “Our Lady of New York City,” holding this city in Her embrace, bless and protect New York and America for millennia to come.

This National Shrine is a cenotaph for those who were murdered on that horrific day twenty years ago, because of who they were – Americans.

We are the people of the Resurrection. The National Shrine is a symbol for all to behold of the victory of resurrection over death, of good over evil, of light over darkness, of peace and love over violence and hate.

The National Shrine now stands as an eternal witness to the lives lost, and a reminder of where and how they perished. May their memories by eternal. I pray their families come to the warm embrace of this sacred space to find peace and solace.

As our country’s newest important institution, the National Shrine will celebrate America by welcoming people of all faiths, all creeds, and of all nationalities.

For the Greek American community, the National Shrine is our “American Parthenon” - the most visible symbol of Hellenism in the United States.

The National Shrine elevates our Faith and Ethnos in America to levels we thought unimaginable and demonstrates what the Greek American community can accomplish with the proper vision and leadership.

For Orthodox Christians, the National Shrine is our American Hagia Sophia, the daughter of Hagia Sophia in Constantinople, the greatest Church ever built.

I pray that by constructing this National Shrine, we, the Church militant, have proven ourselves worthy of the Church triumphant.

We thank His Eminence, Archbishop Elpidophoros of America, for his public commitment to completing the National Shrine. On the day of his Enthronement three years ago, he proclaimed with confidence and conviction that the National Shrine must be built and consecrated. He understood the importance of the National Shrine not only to his faithful and Church, but to the world.

We thank the extraordinary service and leadership of Father Alexander Karloutsos, Protopresbyter of the Ecumenical Patriarchate, and a rock of the Church in America. Father Alex is the alpha and omega of the National Shrine. His sheer force of will, inspiration, love and eternally wise counsel over the past twenty years made this miracle possible. We are proud that Father Alex will receive the Presidential Medal of Freedom from President Biden next week for his contributions to our nation, including St. Nicholas.

We thank Dennis Mehiel, Chairman of the Friends of St. Nicholas, for his leadership. Dennis is a hero. His goodwill, established over a lifetime of public service and service to the greater good, provided the necessary trust and the credibility with the State of New York and the Port Authority to build this National Shrine.

We thank the band of brothers and sisters known as the Friends of St. Nicholas and their families. Three years ago, this small group of remarkable Trustees picked up the Cross and undertook this mission and ministry when nobody thought it would succeed. They put their names and reputations at risk, and acted with faith, humility and conviction.

I will always be profoundly humbled for the blessing and privilege of working with this amazing group of leading Greek Americans and deeply devout Orthodox Christians.

We thank the small group of major donors and donor organizations that made the National Shrine a reality, especially the Spanos Family for their extraordinary philanthropic leadership.

We thank our major donors for their philotimo, philanthropy and faith. They understood. They believed. Their significant donations that made the National Shrine a reality.

Our major donors are the “joyful givers” spoken of in Scripture.

May Almighty God bless them and their families.

We thank Richard Browne and Lou Katsos for their tireless dedication and commitment, collaborating with the architects, contractors and vendors to build this National Shrine.

For all of us, our work begins today to ensure the National Shrine achieves its potential to be the shining city on the hill and a beacon of hope for the world.

This National Shrine will last for a thousand years.

Long after we are gone, the generations that follow will worship in the National Shrine, humble themselves before the Justinian Cross on its Dome, and take pride in the faith of their predecessors.

Long after we are gone, the generations that follow will enter the National Shrine and be reminded that in the end, faith, peace and love always triumph.

Thank you very much.