PHILADELPHIA – The plenary session of the 42nd Clergy-Laity Congress concluded Wednesday July 9, after several days of forums, meetings of committees, and workshops.

The session consisted of reports from committees, ministries, and affiliated organizations and institutions of the Church.  The reports presented and discussed were by the following: Administration, Finance, Ecumenical and Interfaith Relations, Philanthropy, Chaplaincy, Archons of the Ecumenical Patriarchate, Leadership 100, Religious Education, Hellenic College Holy Cross, Center for Family Care, Communications, Marriage and Family, and Greek Education.

The plenary session began at 9:00 am with an opening prayer.  Demetri Moschos and Cathy Walsh directed the session proceedings with the first report offered by Tony Stefanis from the Administration Committee.  The first item considered was an amendment to Article 22 of the Uniform Parish Regulations concerning non-viable parishes.  Discussion followed on the process to be followed to determine when a parish is non-viable, how this will be reviewed at the Metropolis level, the process of appeal, and the length of the process of review.  The amendment was approved.

In addition, the report of the Administration Committee focused on strategic planning related to the vision and goals of leadership, faith based culture, infrastructure, and human resources.  Stefanis emphasized that this is a defining time for Orthodoxy and for addressing key challenges, especially with the elimination of all debt and the significant increase in the budget.  His Eminence Archbishop Demetrios of America expressed gratitude to Tony Stefanis and the committee members for their methodical work.  He emphasized that we do not aim to establish a bureaucracy but to increase effectiveness and performance.

The Finance Committee report followed and was presented by George Vourvoulias.  The report emphasized the need to find other sources of money and to have reserve.  The increases in the budget were proposed due to needs and effectiveness, but only if the money can be raised.  The proposed budgets for 2015 of $27.3 million and 2016 of $28.27 million were approved following discussion on specific line items and a recommendation by Metropolitan Methodios that a special meeting of the Synod be convened with the finance committees of the Metropolises to discuss the budget.

His Eminence Archbishop Demetrios emphasized the considerable amount of resources that have been contributed outside of the budget for special purposes.  September 11 and Katrina funds and assistance provided for relief in Greece and Cyprus have extended the ministries and work of the Church far beyond what is budgeted.

As the morning session concluded, reports were offered on Inter-Orthodox, Ecumenical and Interfaith Relations, Philanthropy, and Chaplaincy, and Metropolitan Athenagoras of Belgium thanked those attending and spoke of his experiences at the Congress.

The afternoon session of the plenary began with a report presented by Dr. Anthony Limberakis from the Archons of the Ecumenical Patriarchate entitled "Christians Under Attack."  The report was well received and approved.  This was followed by the report of Leadership 100 presented by George Tsandikos, focusing on the various programs supported by the organization.  Reports followed by Religious Education, Hellenic College Holy Cross, and the Center for Family Care.  Associate Director of the Center, Melissa Tsongranis presented delegates with a resolution emphasizing that family issues be a priority of the Church.  The resolution was approved.

Reports were also given on Communications, Marriage and Family/Interfaith Marriage, and Greek Education.  In addition to the resolution on the family, the delegates also approved resolutions regarding the environment, support for the rebuilding of St. Nicholas, the threats to Christians and other religious minorities in the Middle East, and of a resolution of appreciation to the leadership of the Congress, the chairpersons Michael Karloutsos and Anastasia Michals, the host committee and the host Metropolitan Evangelos of New Jersey, the patriarchal representatives Metropolitans Athenagoras of Belgium and Stephanos of Kallioupolis and Madytos, the National Philoptochos and its President Aphrodite Skeadas, and the leadership and the staff of the Archdiocese. The same resolution expresses appreciation for the late Emanuel Demos, who fell asleep in the Lord July 4.

Following the conclusion of the National Philoptochos Convention, National President Aphrodite Skeadas offered a report on the work of the Ladies Philoptochos Society.  The convention had 430 delegates and 8 observers in attendance.

His Eminence Archbishop Demetrios closed the plenary session offering gratitude to all who had a part in making this a successful Congress. He returned to the theme of the Congress, emphasizing the priority of the Orthodox Christian Family and the church in the home.

The Congress will conclude tonight with the Grand Banquet, having 837 Clergy-Laity participants including 701 parish delegates representing 310 parishes, 38 observers, 80 presvyteres, and 18 retired clergy. The total number of people attending or involved with this Clergy Laity reached 1,500 people, including exhibitors.

More information on the Congress proceedings can be accessed at www.clergylaity.org.

Highlights from the 2022 Clergy-Laity Congress 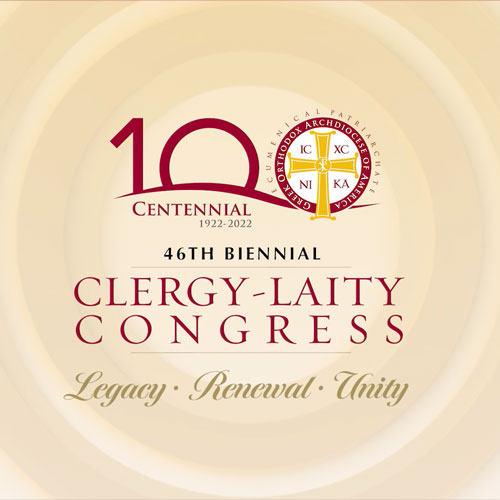 A look back at the 46th Biennial Clergy-Laity Congress of the Greek Orthodox Archdiocese of America, highlighting the many great events and memories experienced over the course of the week, including the Hierarchal Divine Liturgy, the Consecration of St. Nicholas Greek Orthodox Church and National Shrine, Meetings, Workshops, Panel Discussions, and more!
Read More » 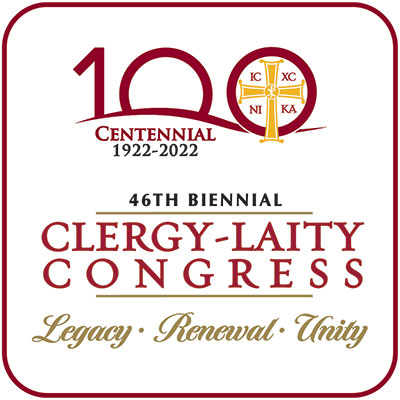 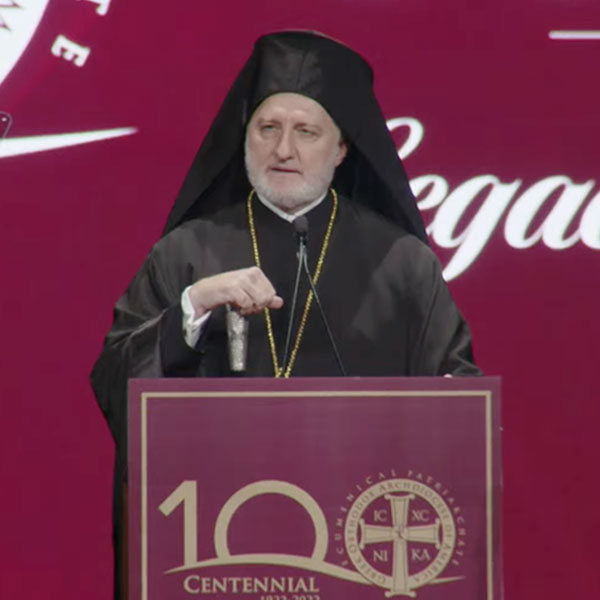 We have a responsibility to their memory, to the present moment, and to the generations to come, to hold their dream – which is our reality – as a precious jewel. To hold it with a conscious decision to work for what is best – a unified and strong Archdiocese, cognizant of our role as the premier and, indeed, first Eparchy of the Ecumenical Patriarchate and Mother Church of Constantinople in the Diaspora.
Read More » 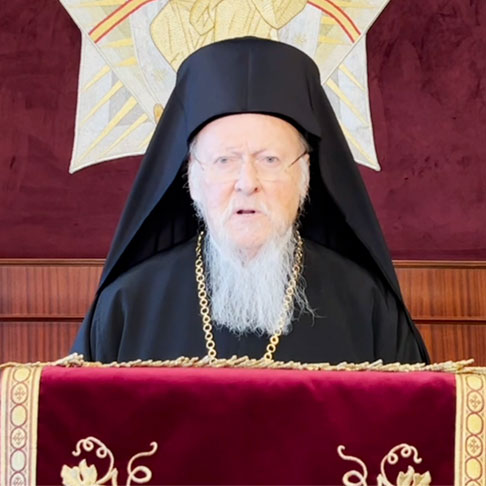 Moreover, I would like you to know that, along with the Holy and Sacred Synod here at the Mother Church of Constantinople, I too am delighted to share with you the historic milestone of your centennial anniversary since the establishment of the Greek Orthodox Archdiocese of America.
Read More » 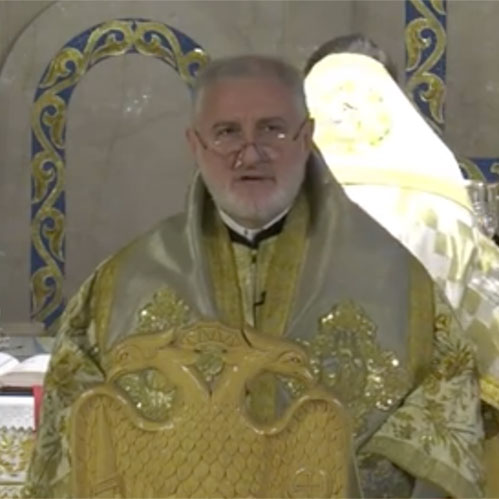 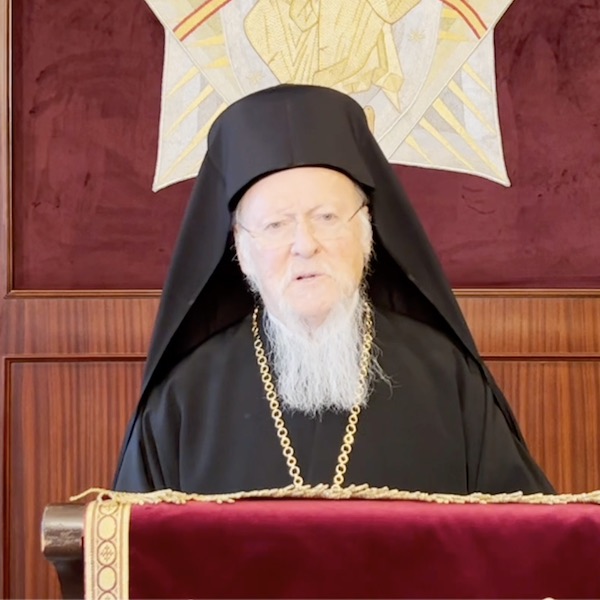 Welcome Message of His All Holiness Ecumenical Patriarch Bartholomew to the Participants of the National YAL Conference on Saturday, July 2, 2022.
Read More » 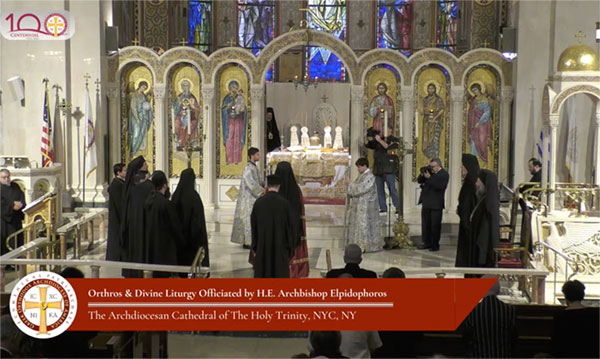 Orthros and Hierarchal Divine Liturgy officiated by His Eminence Archbishop Elpidophoros of America from the Archdiocesan Cathedral of the Holy Trinity in New York City as part of the 46th Biennial Clergy-Laity Congress on Sunday, July 3, 2022.
Read More »

Homily during the Divine Liturgy by Archbishop Demetrios of America

Homily given by Archbishop Demetrios of America during the Hierarchical Divine Liturgy for the 42nd Biennial Clergy-Laity Congress. The service was held in the historic Greek Orthodox Cathedral of Saint George of Philadelphia with hundreds of faithful in attendance.
Read More »

Address of Vice President Joe Biden at the Grand Banquet

Address of His Eminence Metropolitan Stefanos at the Grand Banquet

Address of His Eminence Archbishop Demetrios at the Grand Banquet

His Eminence Archbishop Demetrios of America addresses the attendees of the Grand Banquet of the 2014 Clergy-Laity Congress on July 9, 2014.
Read More »

Address of His Eminence Metropolitan Evangelos at the Grand Banquet

His Eminence Metropolitan Evangelos of New Jersey addresses the attendees of the Grand Banquet of the 2014 Clergy-Laity Congress on July 9, 2014.
Read More »

From Wedgies to Widgets: Bullying in the Age of Technology

Bullying is an age old issue that has found a new platform: cyberspace. What once necessitated bold face-to-face interaction now lurks in the shadowy solace of cellphones and computers. It begins at school, on the playground, and at GOYA but now continues into our homes and safe spaces.
Read More »