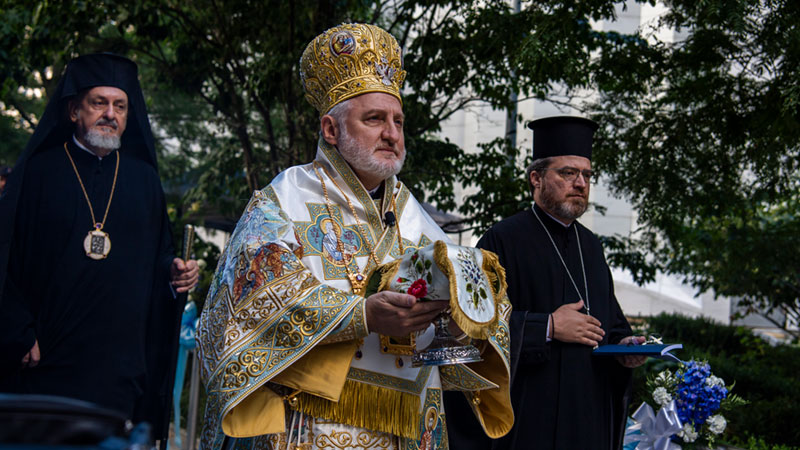 Your Eminences and Graces,

Dear sisters and brothers in Christ,

Today, we brought the Holy Relic of the Great Wonderworker of Myra to its final resting place, within the Holy Altar of the resurrected Saint Nicholas Church and National Shrine. This most ancient ceremony dates back to the origin of Christian Houses of worship, which were raised over the tombs of martyrs and saints.

Today, these Holy and Precious Remains of a Saint – whose own history stretches back across the millennia and across the ocean, to Asia Minor and the glory of Byzantium that lives on in our Ecumenical Patriarchate – are joined to the history of those for whom the World Trade Center was their tomb. These modern martyrs – slain by unjust hatred – were denied even the chance of burial. And so, with today’s Consecration, Ground Zero remains forever Sacred Ground – a place of remembrance, a place of reconciliation, a place of forgiveness and a place of love.

All of you who have gathered here, whether within these shining marble walls made of the same stone that graces the Parthenon of Athens, or standing and praying with us outside in Liberty Park – which, on this Fourth of July, could not be a more fitting place in which to participate – all of you are bearing witness to this Consecration and what it means for the Church of Saint Nicholas, destroyed on 9/11;

For the City and State of New York, whose Port Authority became a soul-partner in the challenge to rebuild and restore what was lost;

For the American People, whose heart was so deeply scarred that tragic and fateful day;

It is my solemn pledge that we will offer the very best of our Orthodox faith – a faith that encompasses the world and is led by the greatest leader we have known in centuries:

His All-Holiness Ecumenical Patriarch Bartholomew, the longest serving Patriarch in history, upon the See of the First-Called Apostle Andrew.

We chose the Fourth of July for this Consecration for a very special reason. We chose it precisely because this quintessential American Holiday represents what is best in our Liberty – that is, freedom of conscience and the freedom to worship as we best determine for ourselves and for our families.

Indeed, this is the beauty of America, and it will be the beauty of the Saint Nicholas National Shrine, too. For, although it is a Greek Orthodox House of Worship, we welcome all. We invite all. We accept all. And we practice love of others; not prejudice; not rejection; and certainly not hatred.

This Shrine will be a place for everyone who comes to the Sacred Ground at the World Trade Center to imagine and envision a world where mercy is inevitable, reconciliation is desirable, and forgiveness is possible.

We will stand here for centuries to come, as a light on the hill, a shining beacon to the world of what is possible in the human spirit, if we will only allow our light to shine before all people, as the light of this Shrine for the Nation will illuminate every night sky to come, in our magnificent City.

My friends, today, you are lighting that lamp of peace, hope, faith and love, and the oil of gladness that everyone outside of the Church has contributed will be added to the oil that we will collect in a few moments as well. And this oil will feed the lamp upon the Holy Altar, which will shine perennially as a sign of commitment and witness.

We have journeyed a long way to come to this precious moment, and it would not have been possible without the three persons we are honoring today. In and through them, we also honor everyone – especially the Friends of Saint Nicholas – whose sacrifices have made this day possible.

Dennis Mehiel, Michael Psaros and, above all, Father Alex Karloutsos.

Even if we had the entire day at our disposal to speak about them, it surely would not be possible to say nearly enough in order to adequately express our abiding gratitude. Nevertheless, please permit me to state the following:

Dennis, you were unexcelled in your unwaning energy and faithfulness to bring together the Church and State, so as to find a solution for the rebuilding.

And Father Alex, esteemed Protopresbyter of the Ecumenical Throne, no one has done more than you to bring us to this victory of the People – the literal meaning of the name, Nicholas. Later this week, the President of the United States will award you the highest civilian honor of our Nation – the Presidential Medal of Freedom. And no wonder. When all lost faith, you kept it. When all gave up hope, you hoped all the more. And the love you hold for this Church will be forever recognized in this Shrine, as we shall install in the Narthex of this Church the icon of your patron Saint, the Holy Alexander, Archbishop of Constantinople, as a perpetual memorial to you, your sacrifice, your faith and your love.

We continue now with the Divine Liturgy, with thankfulness to God for His mercy, and with songs of praise and glory for His wonders, which we behold in the Saint Nicholas Greek Orthodox Church and National Shrine here at the World Trade Center. Amen.